Two Open Houses were held in late May 2015 to present the key elements of the OCP and zoning bylaw.  Those in attendance had the opportunity to review the draft bylaws and ask questions.  Comment forms were also provided to assist in gathering feedback on the draft OCP.

Approximately 40 people attended the Open Houses.  Information that was provided at the meetings can be found under the Links below.  The Comment Form is also listed, please note the due date for completion is June 30, 2015.  The comment form can be mailed, dropped off at our office or emailed to mbates@rdek.bc.ca.  If you have any questions or would like to discuss the OCP or zoning bylaw contact Michele Bates, Planner at 250-489-2791. 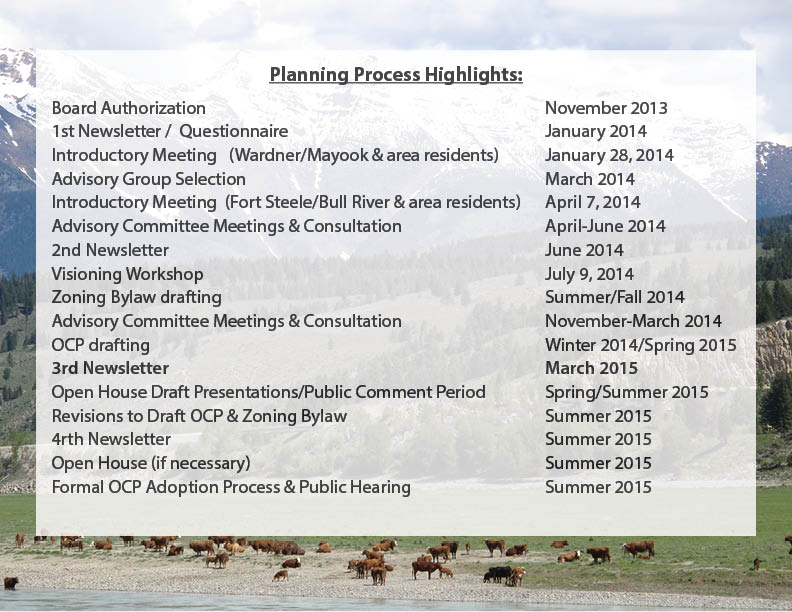 Over the past few years, the Wardner and Mayook area has seen an increase in development interest.  With this increased pressure, members of the community have expressed a desire for a planning process within the area. The proposed OCP aims to develop policy that reflects the community vision and provide proactive policy direction to future land use development and conservation in the plan area.  The zoning bylaw assists in limiting incompatible neighboring land uses and provides certainty to land development opportunities.

In January 2014, approx. 200 newsletters and questionnaires were sent to property owners within the Wardner and Mayook area to initiate the planning process.

An introductory public information meeting which initiated the Warder and Mayook Area planning process was held on Tuesday, January 28th.  Approximately 60 people attended the meeting which consisted of a staff presentation and 3 group activities.

The goal of the group activities was to allow residents to identify assets within the communities, express their land use planning concerns and voice their vision for the future of the planning area.

An introductory public information meeting for the Bull River – Fort Steele residents was held on Monday April 7th.  This meeting had minimal attendance.  A newsletter which highlighted the goals and timeline of the planning process was mailed out in July 2014. (Newsletter)

A visioning meeting was held on July 9th and approximately 24 people attended.

The meeting consisted of a brief overview of Official Community Plans and Zoning Bylaws as well as the steps in the planning process.  Those in attendance were asked to participate in two activities.  The first assignment was a group mapping activity with the goal of highlighting where future development or preservation could occur.  The second activity was a “hands-on” question and answer period. Staff asked those in attendance questions relating to policies that could be included in the OCP and with handheld “clickers” attendees could agree or disagree with the policy with the results being displayed in real-time.

An Advisory Committee for the planning process was selected in March 2014 and has met on several occasions to review the draft Steeples Zoning Bylaw and Official Community Plan.  The composition of volunteers on the Advisory Committee held a broad range of interests and subarea representation.

The Advisory Committee’s role is to provide advice and feedback to RDEK staff and the Area Director and act as a liaison with the public throughout the planning process.  They are tasked with identifying key issues that should be addressed in the OCP and to provide advice on the development of land use policies.

The Advisory Committee is acting in an advisory capacity only.  The group does not have decision making authority.

Thank you to Alan Barnard, Avery Hulbert, Brian Moran, Curtis Penson, Dave Urban, Douglas Hulbert, Herb Janzen, Jacque Savage, Lawrence Mackenzie, Morgan Bridger and Kim Miller for your time and effort.  Your dedication and hard work are hugely appreciated.  A big thank you also goes out to MaryLou Ferguson who has taken on the roll of Chair of the Advisory Committee.